The WoW Variety Show is back with Episode 2!

The World of Warcraft Variety Show is back with Episode 2 on December 10th and 11th!

The Dragon Isles are arriving in World of Warcraft, and with them, the latest episode of the WoW Variety Show featuring new challenges, new faces, and new prizes! Mark your calendar to tune in on Youtube and Twitch from December 10 to December 11.

Episode 2 of the WoW Variety Show is coming soon to Azeroth’s newest continent! We’ll be showcasing some of the very best that the Dragon Isles has to offer, from awakening on the molten shores to soaring high through beautiful skies. This weekend-long excursion will be jam-packed with plenty of action, adventure, and surprises for our contestants and audience alike. Participation in this episode’s activities have been expanded to include both EU and NA players, with spots for over 300 contestants!

Think you can take the heat? Join the WoW Variety Show Discord and apply today to take flight! 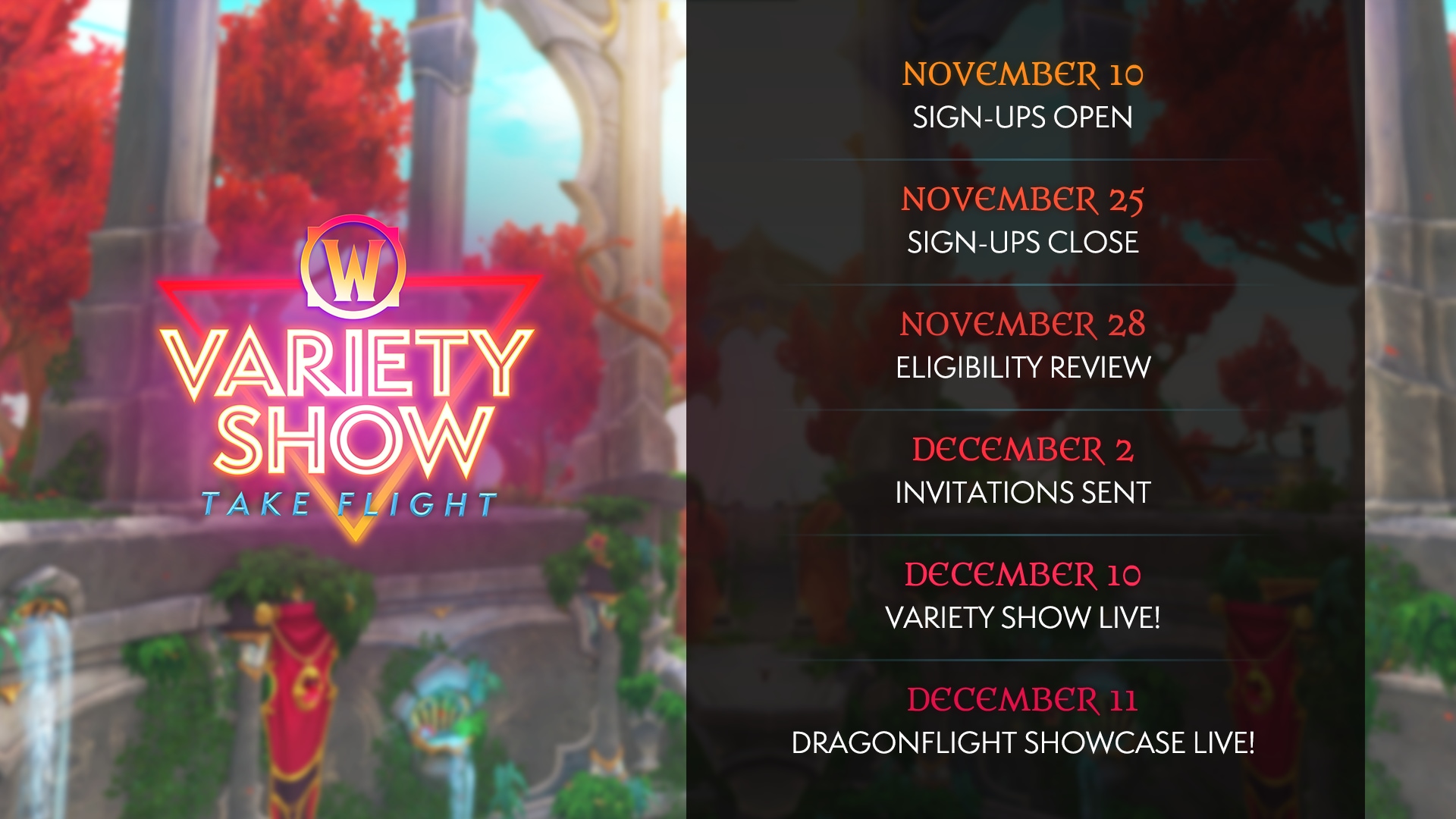 The first day of the show will have three activities featuring our friendly competitors, with some special surprises in store that’ll bring even more fun to the show!

Four WoW Celebrity Contestants (to be revealed in the coming weeks) must battle monsters, one another, and our Wheel of Warcraft to see who can gain the most experience within an hour!

Ready, set, relay race! Four teams, each comprised of one WoW Celebrity Contestant and four WoW Community Contestants, will duke it out in the skies on dragonback. Not only will they need to work together to ensure a successful relay, but they’ll need to think quickly to navigate through our course and make it to the end. We’re scouting the fastest Dragonriders in Azeroth for this activity, so sign up today for your shot at the skies!

Finally, we’ll be ending the day with a massive expedition throughout the Isles! 200 of Azeroth’s most adventurous inhabitants from NA and EU will be recruited to find the fastest path possible through the leveling zones of the Dragon Isles. Register today to start your journey, because spots are limited.

But wait, there’s more! We’ve got some special surprises in store for the show beyond these three activities, so stay tuned.

Teeming with keys and packed with PvP, the second day of the show will be back with even more variety action!

Two teams composed of some of your favorite Mythic+ personalities will explore the four new Dragonflight dungeons present in Season 1. Join them to check out the new strategies and routes for some quick tips and tactics that will give you a headstart pushing your score!

Evokers will enter the Arena in Dragonflight, and we’re inviting eight gladiators to participate in a series of Evoker-only show matches. This elimination 2v2 bracket will be followed by several Solo Shuffle matches as the finishing touch to the final day of Episode 2 of the WoW Variety Show!

How many spots are open?

For the Dragonriding Relay, each WoW Celebrity Contestant will race alongside four WoW Community Contestants for a total of 16 spots.

When does registration close?

When will invitations be extended?

Who are the WoW Celebrity Contestants?

What are the prizes?

What are the surprises?