It's been an inspiring month for the World of Warcraft team, as we've watched the world soar over the Dragon Isles, defend their Renowned allies from the Primalist threat, stay awhile and listen to tales of regret, craft inspired items, delve into dungeons, and make vast, vast quantities of soup.

But this tale is just beginning. A WoW expansion is not a single moment in time but a journey —we know that the merit of an expansion hinges on the sustained quality of its entire arc. Years after its release, Legion is remembered fondly as much for the 11-week content update cadence that served as the framework for its first year as it is for artifact weapons or Khadgar's brilliant dad jokes.

In planning out the road ahead following the release of Dragonflight, we've been mindful of the duty we owe our players to nurture this living world and, frankly, the need to do better than we have at times in the recent past. Our goal for Dragonflight is that there should always be something right around the corner, with a new update hitting our test realms shortly after the last one is live and in your hands.

In total, we are planning to deliver six content patches, fairly evenly spaced, over the course of 2023. This will include two major updates, the traditional pillars of our expansions—with new zones, raids, and seasonal rewards—but in between those, we want to keep expanding and evolving our world with new world events, updates to systems, and evergreen holidays, new dungeon experiences, new narrative chapters and cinematics that can serve as epilogues or as prologues to the next major step in the adventure, and, most importantly of all, more opportunities for us to respond to feedback and change or add elements based on what we're hearing is most needed by our players.

We recently announced the upcoming 10.0.5 content update, which should go live early next year, bringing with it the Trading Post system which allows players of all playstyles to earn a wide range of fun cosmetic rewards of their choice, as well as (finally!) allowing Poor-quality and Common-quality items to be acquired as transmog appearances— for those who prefer a somewhat humbler look—and a bit of new world content in the Primalist Tomorrow area.

Shortly after that is in your hands, we'll release the 10.0.7 content update onto our Public Test Realm. 10.0.7 will contain a new quest campaign and repeatable world content set in the Forbidden Reach, as the dracthyr return to their place of confinement (along with some unexpected guests) to learn more about their origins and their destiny. This content will set up the next major chapter of Dragonflight, and by its conclusion, it should be obvious what our next destination must be. Alongside this new content, we also plan to add questlines for Human and Orc cosmetic Heritage Armor, update some of our recurring holidays, and more.

There will also be a 10.1.5 and 10.1.7 content update coming in the second half of the year, bridging the period between our second and third major updates. We don't want there to be any specific formula for the size or shape of these updates, but the goal is simply more Warcraft: more story, more content, more rewards, more events, more tech improvements, with less downtime between them. I don't want to spoil everything, and I'm confident that there are at least a couple of surprises coming along the way that no one is expecting. And some of the details simply aren't decided yet, because your feedback will help shape exactly what we prioritize in these updates. 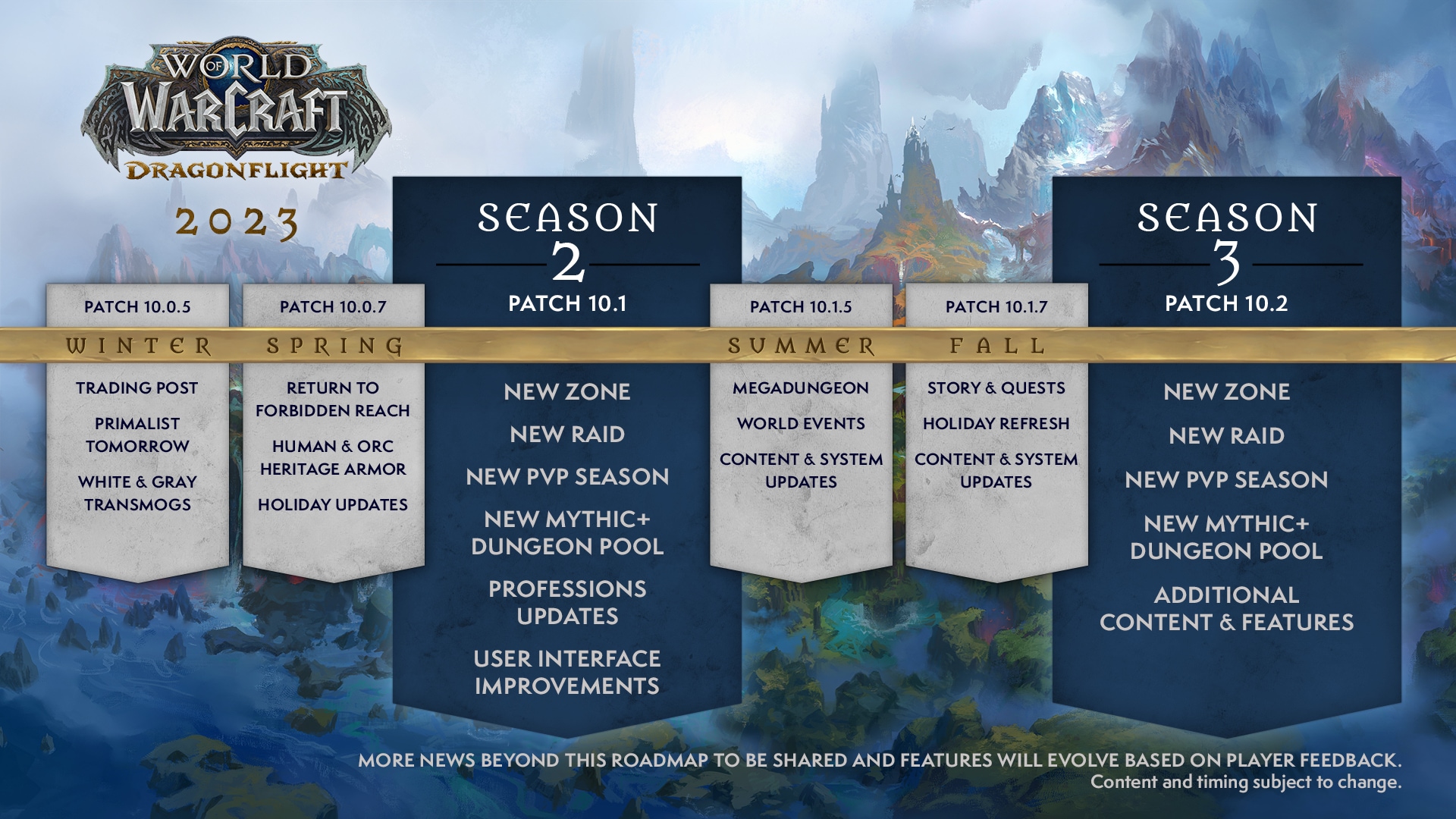 We're honored and humbled by the reception to Dragonflight so far, but this is only the start. From me and the entire development team, please accept our wishes for a happy, healthy, and peaceful New Year, and we can't wait for you to see everything we have in store for Azeroth in 2023.